Why is quinoa superfood at all?

Well, that’s easy. Because quinoa is a complete protein, unlike most other foods. Quinoa has adequate levels of all 9 essential amino acids.

It was believed earlier that the only reliable source of dietary protein was from animal products. But recently, even plant sources have been identified as comparable protein-rich foods, with quinoa, soy and sacha inchi seeds gaining popularity as ‘complete proteins‘.

But is quinoa superfood really that different from other protein containing foods?

Yes. Many foods contain some protein. Eating enough of them can ensure that your daily requirement of protein is met. However, quinoa is such a rich source that the quantity or variety of plant-based foods you’d otherwise need to make up this requirement is reduced.

What Is Quinoa Superfood?

Quinoa superfood is the seed of a plant that comes from the same family as spinach, amaranth and beet. Though classified as a grain because it is cooked and eaten just like other grains, it really is a seed.

For many years, native South Americans have used quinoa superfood as food and medicine. For more than 5,000 years, quinoa (Chenopodium quinoa) has been cultivated on the slopes of the Andes mountains and Incans call it “mother grain”.

Consumed widely for strength and stamina, quinoa superfood is gaining rapidly in popularity because it is tasty and nutritious. Being gluten-free, quinoa is not allergenic. Quinoa superfood is also densely packed with minerals, anti-oxidants and vitamins that help reduce blood sugar and heart disease while also boosting brain function and relieving anxiety. 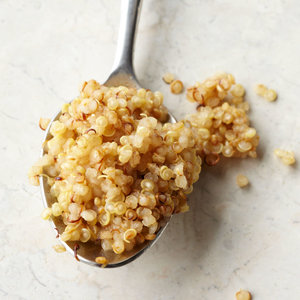 The biggest advantage of quinoa as a superfood is the high content of easily digested protein. Each 200 gram cup of quinoa has around 8 grams of protein, which is more than an egg. More importantly, there is a mix of all 9 essential amino acids, which makes quinoa superfood an excellent choice for dietary protein.

Quinoa has large quantities of tryptophan, an aminoacid responsible for mood, sleep and the feel-good neurotransmitter known as serotonin. No wonder quinoa is said to help lower stress and improve sleep. There are also more cysteine, methionine and lysine in quinoa than most other plant foods.

More than other grains, quinoa superfood has minerals like iron, magnesium, calcium, copper and zinc in abundance. A cup of quinoa can deliver 120 mg of magnesium, which accounts for a third of an adult’s daily requirement of the mineral known to help relax muscles and blood vessels. This lowers the risk of high blood pressure, migraines and stroke.

Experiments in animals indicates that quinoa superfood, with its combination of vitamines, amino acids and minerals, can protect brain cells and improve memory.

People at risk for diabetes have much to cheer about quinoa. It lowers risk factors for heart disease and diabetes, promoting a healthy body weight and keeping blood sugar levels near normal.

Quinoa has a high fiber content, with each cup providing around 5 grams of fiber. This is another factor that slows down the absorption of glucose from the gut, maintaining sugar levels in blood constant. Blood sugar and insulin levels improved after eating quinoa superfood. Triglycerides and blood levels of bad cholesterol dropped.

Research On Quinoa As A Superfood

Research suggests that quinoa has anti-obesity, lipid lowering and blood sugar controlling effects. When experimental rats were administered quinoa extracts, they lost weight and kept it off even if they were fed sugar and fat rich diets.

In a 2010 report published in the journal ‘Plant Foods for Human Nutrition’, quinoa-fed rats dropped total and LDL cholesterol levels along with blood glucose. 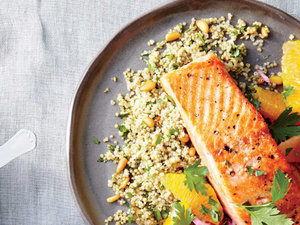 Embrace Quinoa Superfood In Your Lifestyle

Quinoa, like other top superfoods, is now readily available in most supermarkets and health food outlets. When stored in air-tight containers in a dry place, quinoa will last several months.

Before cooking quinoa superfood, soak and rinse it to remove saponins that coat its outer surface and make it taste bitter. It is easily cooked by steaming it with water for around fifteen minutes. The cooked seeds are fluffy with a little crunchiness, with a mild nut-like flavor.

Quinoa can also be toasted or dry-roasted in a pan for a few minutes. It’s an excellent alternative option to cereals and grains. You can add quinoa to salads for a protein boost, or mix it with other vegetables. It’s delicious when eaten with fresh or dried fruits, spiced with cinnamon and a dash of maple syrup.

You’ll find some excellent superfood recipes in this collection which show you how to prepare delicious dishes with quinoa superfood.

And these books will give you more valuable information about superfoods and their benefits for healthy living.